Crash Nitro Kart was the last Crash Bandicoot game released under the Universal Interactive label, which parent company Vivendi would scrap after the game's release, in favor of their new company, Vivendi Universal Games.

Velo introduces himself to both teams, whom he forces to race in the Galactic Circuit.

Crash, Coco and Crunch Bandicoot are at home relaxing while their nemesis, Doctor Neo Cortex, ponders his next course of action to defeat the Bandicoots and achieve world domination. Suddenly, both groups are abducted by a mysterious white light that takes them to a large colosseum somewhere in another galaxy. The galaxy is ruled by Emperor Velo XXVII, who plans on having the teams race in the Galactic Circuit for the entertainment of his subjects. He promises the Earthlings that winning the races will win their freedom, but threatens them with the destruction of Earth if they refuse to race.

After both teams accept the challenge, Velo explains that the racers will compete on four worlds of his choosing, and promises a race against the galactic champion if the champions of those worlds are defeated. When Krunk, Nash, Norm, and Geary, the champions of Terra, Barin, Fenomena, and Teknee respectively, are defeated, the Earth racers go up against the galactic champion, Emperor Velo. The racers defeat Velo, but he refuses to send them back to Earth unless they win all of the time relics and defeat him again. Velo loses again to the Earth racers and literally explodes in a bout of fury, revealing himself to be a robot suit controlled by a small gremlin-like version of himself.

If Team Bandicoot win the race, Velo, having lost his influence over his subjects, dejectedly relinquishes his empire to the Bandicoots. Crash considers becoming the next emperor of the galaxy, but decides otherwise and gives control back to Velo in exchange for sending the Bandicoots back to Earth. If Team Cortex win the race, Velo struggles with Cortex over the possession of his scepter, only to be stopped by Tiny. Cortex uses the scepter's power in an attempt to return to Earth, but the scepter breaks and sends Cortex, N. Gin and Tiny to Terra instead. When they are confronted by the natives, Tiny repairs the scepter and is subsequently revered as a king, much to Cortex's annoyance. 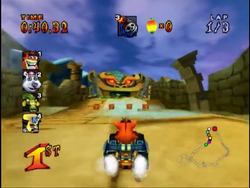 Crash Nitro Kart plays much like its predecessor, Crash Team Racing. The player can have their racer perform functions such as accelerate, steer, hop, brake, reverse, and even use weapons and power-ups. Boosting is a core part of the gameplay. When the player boosts, their kart momentarily goes slightly faster than its normal top speed. Boosts are achieved by driving over boost pads scattered across the tracks, pumping the gas at the starting line, and holding the gas button at the right time when being reset on the track. Another technique used for boosting is the power slide. To execute a power slide, the player holds down one of the hop buttons while steering. While sliding, a curved boost gauge appears next to the racer's kart. When the gauge goes from green to red, the player has to press the opposite shoulder button to obtain a boost. The higher the boost gauge goes, the more powerful the boost is.

There are six sub-menus on the main menu, ordered from top to bottom: Adventure, Single Player, Multiplayer, Best Times, Options, and Extras. The first three consist of various modes, Best Times allows the player to view their character's best times on each track, and Options is where the sound and controller option for each player can be configured, and Extras has bonus unlocked content, such as cut scenes from Adventure mode. 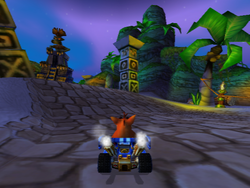 Adventure mode is a single-player game in which the player must race through all of the tracks and arenas in the game and collect as many Trophies, Relics, Boss Keys, CNK Tokens and Gems as possible. The objective is to win every race in the five worlds so that the playable characters can be freed from Emperor Velo XXVII's threat of destroying Earth. Unlike Crash Team Racing, the game's cutscenes are pre-rendered in full-motion video rather than from the hardware itself.

New to Crash Nitro Kart's Adventure mode is a more character-focused story incorporating the game's team-based racing mechanics: unlike in Crash Team Racing, where the player could choose one of eight characters to play as, the player is limited to selecting either Team Bandicoot or Team Cortex, each with three characters that the player can swap between at any time; selecting a team will affect the cutscenes that play throughout the mode, and feature a different ending once the mode is completed. Teammates in the Adventure mode correspond to the player's team, and can also win trophy races for the player if they finish in first place. As either Team Bandicoot and Team Cortex progress through Adventure mode, they receive in-game tips from Aku Aku or Uka Uka respectively.

Velo's Citadel is the central area of the hub world, and is where the racer can access each of the five worlds through gate-like portals. Most gates are initially locked, so the player's racer must complete the races of one world to unlock the next world. When inside a world, the racer can access a track by driving onto its Warp Pad. By winning a race, the racer receives a Trophy. Once the racer has obtained all three Trophies in a world, they can race against that world's champion in a boss race. If the racer wins in a boss race, the world's champion relinquishes their World Key, allowing the racer to access the additional modes of that world and also unlock the next world. The player can check their progress and review their hints through a technological assistant named "Sparky", which carries the functions of a regular pause menu.

In Relic Race, the player's racer must race through a track alone and complete three laps in the fastest time possible. To aid the racer, Time Crates are spread throughout the track. When the racer drives through a Time Crate, the clock freezes for whatever number of seconds are indicated on the Crate. If all of the Time Crates on a track have been destroyed, the final time is reduced by ten seconds. The racer wins a Relic if they beat the time indicated on the screen.

The CNK Challenge plays like a normal race, except that the racer must also collect the letters C, N and K scattered throughout the track. If the racer manages to collect all three letters and come in first place, a CNK Token is awarded. These tokens come in four different colors, and by collecting four of the same color, the racer can access the Gem Cup of the corresponding color.

Gem Cups are racing tournaments held against computer-controlled opponents, and are accessible through a special gate at Velo's Citadel. If one of these cups is won, a Gem is awarded. When the racer has collected every Trophy, World Key, and Relic, they can race against Velo on his personal race track. If the racer manages to win this race, the game is won.

Once the racer has collected every Trophy, World Key and Relic, they can race against Velo on his personal race track. If the player's racer manages to defeat Velo in this race, the game is won.

There are five modes available on the Single Player selection menu.

There are five battle modes in Multiplayer, and all of them support 2-4 players. In each of these modes, racers compete in battle arenas, where they can collect weapons and attack opponents.

Five distinct types of crates are scattered throughout the tracks and arenas.

If the player's racer has collected 10 Wumpa Fruits, any power-ups they collect become "juiced,"[1] a term referring to an upgraded weapon.

Names in other languages