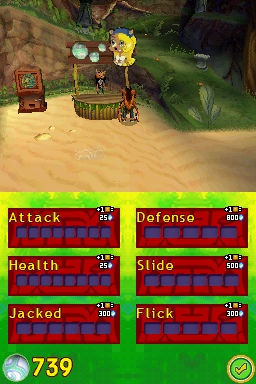 Crash at the Evolution Kiosk of Wumpa Island

The Evolution Kiosk is a shop run by Coco in Crash of the Titans' Nintendo DS version. It is where Crash can use Mojo to purchase upgrades for six of his abilities: Attack, Defense, Health, Slide, Jacked, and Flick. The higher upgrades cost more Mojo. The Evolution Kiosk is found in every hub area (not including Cortexbot).

Evolution Kiosks appear to be made of bamboo. It has a wooden banner displaying Coco's upper half and three Mojo. A panchiko machine can be found to the left of every Evolution Kiosk.