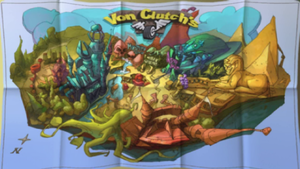 A map of Von Clutch's Motorworld

Von Clutch's MotorWorld is a destructive racing theme park was designed and built by Ebenezer Von Clutch. It is the main setting and hub area of Crash Tag Team Racing.

The park is first characterized by the entrance where it has a mechanized water green castle, purple floor and several Von Clutch statues throughout the building. Within the park is a spiral path containing 5 themed attractions around, bronze armillary ball in the center, tents and a bowling game at the end of the line. The main area is the Midway, which is where Crash can access the five other attractions, Mystery Island, Happily Ever Faster, Tyrannosaurus Wrecks, Tomb Town, and Astro Land.

This park is first shown in Chick and Stew's report. Prior to the game's events, the five Power Gems, which were stolen. When Crash Bandicoot arrived in the area, he participated in many races and attractions to collect Crystals, Wumpa Coins, and a Power Gem in each world. Late into Crash's adventure, Willie Wumpa Cheeks reveals that he stole the Power Gems out of spite toward Von Clutch.

In the ending, Von Clutch transfers ownership of the MotorWorld to the Bandicoots, but they decide to return it to him.