Crash Tag Team Racing is the third racing game of the Crash Bandicoot franchise. It was developed by Radical Entertainment and published by Sierra Entertainment, and it had a multi-platform release in 2005 for the Nintendo GameCube, the PlayStation 2, the PlayStation Portable, and the Xbox. A Nintendo DS version was planned but was later cancelled.[1]

In 2007, Crash Tag Team Racing was included on the three-disc Crash Bandicoot Action Pack compilation, along with Crash Nitro Kart and Crash Twinsanity. Some content and the characters from the game were included in Crash Team Racing Nitro-Fueled. 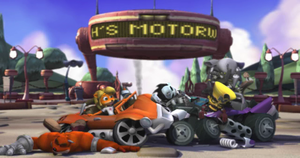 The Bandicoots and Cortex crashed their cars into Von Clutch's MotorWorld

The game opens with Chick Gizzard Lips and Stew, announcing the farewell race of Von Clutch's MotorWorld. Long ago, Ebenezer Von Clutch, a deranged German cyborg genius, fabricated the ultimate auto-racing theme park. For years, the park's racetracks have wreaked terror on its participants. The park's Power Gems, which have kept the park active, have been stolen.. By coincidence, Crash, Coco and Crunch crash into the theme park while trying to escape their foes Dr. Neo Cortex, his niece Nina, and N. Gin. Von Clutch recruits the six of them to find the missing Power Gems.

At first, Cortex is unwilling to help Von Clutch, but then it is explained that whoever finds and returns all the missing Power Gems will win ownership of the park. Even Von Clutch's life source, the Black Power Gem, was stolen, and without it, Von Clutch will die in a matter of hours. N. Gin informs Cortex that Von Clutch's Motorworld is fertile grounds for them to "plant their new seed of evil", so Cortex believes the theme park becomes their new base of operations against the Bandicoots. From there, the gang is introduced to Pasadena O'Possum, a professional racer hired by Von Clutch to ensure his continued ownership of the park, and Willie Wumpa Cheeks, the mascot of Von Clutch's MotorWorld and producer of its popular beverage, Wumpa Whip. 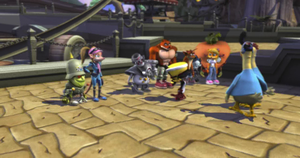 The characters meet together to discuss who stole the Power Gems

After Crash finds and returns all the missing Power Gems and officially wins himself the ownership of the park, a bandaged Cortex suspects that someone is upstaging their efforts to claim ownership of the park. Coco deduces that whoever stole the Power Gems had some connection to Wumpa Whip, because of a trail of the drink appeared at the scene of every stolen Power Gem in the park. Crash is suspected of stealing the Power Gems due to his heavy consumption of the drink, but then Willie Wumpa Cheeks admits that he stole the Power Gems and the Black Power Gem. With the Black Power Gem in his possession, Willie flees to the final area, Astro Land, and prepares to blast off in a large rocket. Von Clutch runs out of power and shuts down.

In Astro Land, Crash eventually retrieves the Black Power Gem, thus saving Von Clutch. Willie prepares to launch the rocket, but Crash pulls a nearby lever that aborts the launch. Before the Bandicoots can interrogate Willie about the Black Power Gem's location, Willie is shot and liquefied by a battleship operated by Cortex, Nina, and N. Gin. Cortex is prepared to obliterate the Bandicoots for ruining his plans to claim ownership of Von Clutch's Motorworld. Cortex attempts to destroy the Bandicoots with a machine gun mounted on his ship, and Crash throws a chicken into the ship's main rotor, causing the ship to behave erratically. Cortex swears vengeance as he flies off in his malfunctioning ship. 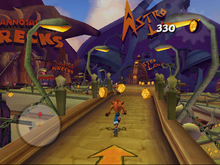 Crash moving around in the main hub area, The Midway

Despite being a racing game, Crash Tag Team Racing features platforming as much as racing. At Von Clutch's Motorworld, the player controls Crash Bandicoot, who goes on an adventure to retrieve the Black Power Gem and the missing Power Gems in each of the five areas of the theme park.

There are a couple of items that Crash can collect from Motorworld. He can retrieve Wumpa Coins in various ways, such as participating in races or playing minigames. If Crash drinks a Wumpa Whip, he can temporarily earn twice the number of collected Wumpa Coins until the timer runs out. With the currency, Crash can unlock rewards such as outfits or cars. He must also collect Power Crystals to retrieve a Power Gem of a themed area. Each Power Gem unlocks another themed area from the main hub, The Midway. Crash can also unlock Die-O-Ramas, which are short clips that show Crash being injured grievously or "killed" in various comical ways. He can also unlock various Gags, which usually show Crash injuring the Park Drones.

Crash can talk to characters with an icon over their head, either to unlock a car, a weapon upgrade, clothing, or to play minigames. The only enemies at Motorworld are Ninja Penguins, and Crash can attack them by either jumping or spinning into them, causing the Ninja Penguins to release Wumpa Coins.

The main hook of the game is the "clashing" feature of the racing sections. This action causes the racer's and an opponent's car to merge. By default, the player's character controls a turret weapon to shoot a limited amount of ammo while the other racer drives the car, similar to Mario Kart: Double Dash!!. The racers can also switch positions in the car and separate their cars.

Von Clutch's MotorWorld has six areas, one of which is Midway, where the five other areas are accessed. Most levels have one minigame except The Midway and Astro Land, which each have two minigames. Many of the levels and race tracks have a pun as their name. The PlayStation Portable version has two exclusive battle arenas that can be acquired via a PSP-PS2 USB connection.

1 - Shortcut must first be unlocked from the level hub.

After developing Crash Twinsanity, Traveller's Tales Oxford Studio moved on to another project that would have continued the storyline from Crash Twinsanity. The team decided to develop a racing game where a player could personalize their car and also fuse with another car. The game went under the name Crash Clash Racing. At this point of development, Evil Crash was planned as a playable character. A plot that was considered is that the game's events would take place in Crash's mind, and the other characters would race around on tracks based on Crash's dreams and memories. For unknown reasons, development of Crash Clash Racing was passed onto Radical Entertainment, who took the fusion mechanic and released the game as Crash Tag Team Racing.[2]

In 2005, a Nintendo DS version of Crash Tag Team Racing was in development by Sensory Sweep Studios, and it was announced alongside the main console version. It aimed to be as close to the console version as possible. The Nintendo DS version was in development for 9 to 10 months before being canceled, with about 2 months left until completion. Development was canceled because the publisher told Sensory Sweep Mario Kart DS was scheduled for a release around the same time, and the title would be unable to compete with it. Other factors are rumored to be attributed to problems with the publisher's management and Sensory Sweep apparently being a poorly run company.[3][4]

When the game arrived into stores, it was met with generally mixed reviews. One complaint about the game was that it somewhat mimicked Mario Kart: Double Dash!!'s dual kart system.[5] Although many critics praised the game's Voltron-esque "car-clashing" element, their main complaints were the game's framerate issues and overall lack of challenge (such as the inability to die in the platforming sections). The game is rather controversial among Crash fans due to the changes made to the characters' personalities and the plot hole-filled storyline.