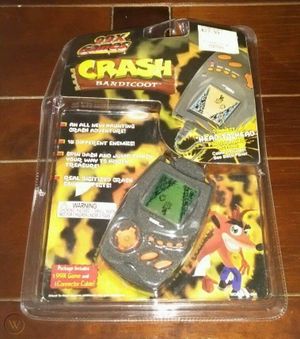 Its release came as part of a series by Tiger Electronics named "99x Games". On release, the Crash Bandicoot handheld retailed at a higher price than average for a handheld holding a standalone game, reflecting the greater level of quality, at $29.99. This was in fact more expensive than the retail price of some games on their earlier Game.com console at the time.[1] Crash Bandicoot was one of four handhelds ultimately released in the 99x Games line, the other three being Mutoids, and ports of Resident Evil 2 and WCW/nWo Thunder.

News of the 99x Games series was first announced in February 1998, at which point only Mutoids was mentioned.[2] Later, in July of that year, a member of staff from Tiger revealed in an interview with a fan on the website Slight's Compendium that they now "had the license" to make games based on the Crash Bandicoot IP, and that the next in the 99x Games line "would be Crash Bandicoot".[3] The following month, Hasbro, who had just recently acquired Tiger Electronics,[4] registered the web domain for the official 99x Games website, and it went live.[5] It is unclear at exactly what point Crash Bandicoot was first released from here onwards, but via The Internet Archive, it can be seen that the game was available from at least as early as November 11, 1998 on Tiger's US Game.com store.[6][7] Depending on when the game was first sold between August and November of 1998, it's likely that the game's release narrowly predated that of Crash Bandicoot: Warped. The same year, Tiger Electronics released another Crash Bandicoot title of the same name under the Tiger Premiere Games brand.

Crash Bandicoot is a platform game played from a third-person perspective. The game is displayed from a pseudo-3D point of view, but uses 2D sprites, in the style of earlier games such as Antarctic Adventure. Unlike in that game, however, the player does have full control over the main character's movements, with the exception of being able to walk backwards to a previously visited area due to system limitations. The player controls Crash and, able to move forward and sideways, has to traverse through a series of levels involving skilfully timed jumping and use of his spin attack to get around obstacles. The game's main objective is to succeed in reaching Mr. Crumb's mansion and taking his treasure, despite the ghouls, zombies and other undead creatures that have been sent to stop Crash along the way. Primarily, Crash progresses on his journey to the mansion by collecting items required to open up new routes.

The game is divided into four themed areas, each representing a part of Crash's journey to reach the mansion from the outside. These are Haunted Forest, Catacombs, Graveyard, and finally The Condemned Mansion. From a hub, referred to as The Mansion Grounds, Crash can select the order in which he plays through these areas.

There are no levels in the traditional sense. Rather, each area is split into three subsections called paths. As Crash reaches the end of a path, he'll come to a fork in the road. Every time a fork in the road occurs, the player will be awarded with an item if they choose to take the right fork. If they choose the left fork, they'll be directed to the next path, but only be able to continue if they gained a particular required item from an earlier occasion when they selected the right fork. This effectively adds more replay value, as it means one path must be revisited several times in order to be able to gain the item needed to progress further.

The collectable items awarded at a right fork in the road are all arbitrary objects, such as a torch, which are stored in an inventory once gained. The inventory can be brought up at any time to select and use the items. This works in a similar fashion to collecting and using items in certain RPGs such as The Legend of Zelda.

If the player manages to get to the end of all three paths in an area, Crash will face a boss. The first three areas' bosses are minions of Mr. Crumb; Thorn Thing, Grumbler and Digger. The last, at the end of The Condemned Mansion, is the ghost of Mr. Crumb himself.

As in the console games which preceded it, crates are scattered around which either contain wumpa fruit, one hundred of which grant Crash an extra life, or an Aku Aku mask that grants him temporary protection from enemies. TNT crates return too, which in contrast to the others harm Crash. Beyond these, others common in the series, such as the arrow crate and nitro, are not included this time. As well as this, it isn't compulsory to break every crate in a level, nor is any collectable rewarded if the player does this, as was the case in the first two games.[8]

Via a separately sold Web Link package, which contained a CD and modem, a Crash Bandicoot handheld could be plugged into a computer. From here, the player could then upload their high score to a leaderboard on the official 99x Games website. The Web Link also alleged to allow the player to download "hidden codes and features" to their handheld through the official website, in the case of each 99x Games title.[9] However, as the website has long since been obsolete, it's unclear what if any extra content there was for Crash Bandicoot in particular, and either way it is now impossible to download unless the files resurface online at a later date. The manual itself only refers to "secret codes".[10]

A cable came free with each copy of the game, which can be used to connect two Crash Bandicoot handhelds together. Multiplayer consists of the playing the same single player campaign, but once connected, the two players compete alongside each other with the handhelds recording their progress. Whoever lasts the longest without reaching game over, in turn gaining the highest score, wins.

The ghost of a wealthy old man named Mr. Crumb, described as friendless and selfish throughout his life, continues to haunt his mansion after dying to protect the large amount of gold he left behind there. Mr. Crumb also woke the undead whilst on his deathbed, to help him guard the mansion and surrounding area once he was gone.

Crash, tempted by the allure of "forbidden treasure" and the rumors surrounding the mansion being haunted, dares to enter Mr. Crumb's mansion to try and collect it. Along the way, he finds himself up against Mr. Crumb's undead army.[11]

In the LCD version of the game, Mr. Crumb's appearance is that of a floating scarecrow head, and is dubbed Mr. Crool.