Crash Bandicoot: The Wrath of Cortex

The game centers on the appearance of Crunch Bandicoot, a genetically advanced bandicoot who was created by Doctor Neo Cortex. Crunch is aided by a group of destructive masks called the Elementals. Crash and Coco must travel to various areas and collect their Crystals, which return the Elementals to a hibernated state, and defeat Crunch.

The story begins somewhere outside Earth's orbit, where we see Doctor Neo Cortex's evil space station base. Inside it, Uka Uka has called together a "bad guy convention" and is angry with the evil scientists. According to him, their track record for spreading evil is pathetic. They conclude that Crash Bandicoot is to blame. Of course, they wouldn't let anything stand in the way of evil, especially not a "brainless orange marsupial", and decide that Crash must be eliminated. And so, Uka Uka orders Cortex and his cronies to come up with one good plan... or else. Cortex informs everyone that in his scientific endeavors, he has created a genetically-advanced superweapon of unbelievable strength. But the final missing crucial element is a power source. Uka Uka brings up the Elementals, a group of destructive masks with the power over Earth, Fire, Water, and Air. If they unleashed their destructive energy, they'll have enough power to bring Cortex's secret weapon to life. They would have a weapon capable of crushing mountains, demolishing entire cities, and wiping Crash Bandicoot off the face of the Earth forever.

Back on Earth, strange things begin to happen. Volcanoes are erupting, thunderclouds are forming, and tsunamis are devastating the coastlines. Aku Aku concludes that his evil twin brother Uka Uka is up to his no-good tricks again, and travels into outer space to find out what he is planning. There, he learns that Uka Uka and Doctor Neo Cortex have unleashed the Elementals, and tells Crash Bandicoot and Coco Bandicoot that they must find a way to stop them before they destroy the Earth and all of its inhabitants. He also tells them that the only way to subside their destructive nature is to imprison them with the use of ancient crystals. Each Elemental can be returned to their hibernation state with a total of 5 crystals. So Coco's new Portal Chamber is unveiled. The Portal Chamber is a device that allows the Bandicoots to travel to different parts of the Earth to gather the Crystals needed to halt the Elementals' reign of terror. "It is time to even the odds into our favor," Aku Aku proclaims.

Just before they start off, Cortex shows up via holographic display. He introduces his super weapon, a bandicoot named Crunch, who is more than eager to take on Crash. Cortex states that Crunch is everything Crash wasn't, and leaves telling Crash that "We all make mistakes". With that, Crash and Coco travel the world collecting the Crystals. Uka Uka's patience is already tested with the defeat of Rok-Ko, the Earth Elemental, but Cortex ensures that Wa-Wa, the Water Elemental will make sure that Crash doesn't see the light of day. But with Wa-Wa's defeat, Crunch claims that he doesn't need a mask to help him, and that he can exterminate Crash all by himself, but Cortex insists that he and Py-Ro, the Fire Elemental will vanquish Crash and his annoying friends together. Cortex is already fed up with Crash making a mockery out of him and his minions. With Py-Ro defeated, Uka Uka questions the value of Cortex's "superweapon", and Crunch is becoming equally impatient, saying he can take out Crash with his metal arm tied behind his back. But Cortex somehow keeps his cool, telling Crunch not to be so silly, and ensures Uka Uka that Crunch will use the Elemental masks, saying there's no need for him to lose any beauty sleep. Things are really getting desperate for Cortex, as he prepares an armada of space stations to strike Earth at one point. But thankfully, they're taken out by Coco. With the final Elemental mask defeated, Crunch's Elemental powers reach maximum capacity. The battle takes to Cortex's space station.

In the end, Crunch is defeated, and Uka Uka is prepared to kill Cortex, but in an attempt to blast Cortex with a fireball, he hits a vital part of the space station. All of a sudden, Crunch realizes that Dr. Cortex doesn't have control over him anymore, and decides to give him a piece of his mind, but Aku-Aku insists that they escape instead, because Uka Uka's energy blast caused a slight chain reaction, resulting in the space station reaching a critical overload. Cortex believes that it might be wise if they do the same, and make their way to an escape pod. Uka Uka blames Cortex for this, and says that if he hadn't ducked out of the way, none of this would've happened. Crunch and Crash escape through Coco's spaceship. Back on Earth, Crunch thanks Crash, Coco and Aku Aku for believing in him, and if it wasn't for them, he would still be under the control of Dr. Cortex. Coco asks Aku-Aku if this is the last they'll see of Dr. Cortex. He says that that's what he'd like to believe, but somehow, he doubts that very seriously. Meanwhile, somewhere off the coast of Antarctica, Uka Uka is once again mad at Cortex for stranding the two of them in the middle of nowhere, and proceeds to pursue Cortex around a small island. Cortex yells into the sky: "I'll get my revenge, Crash Bandicoot! Just you wait!" 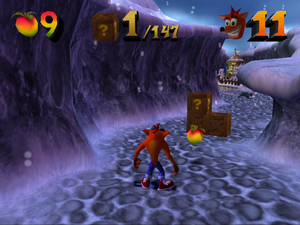 The gameplay is similar to the first three Crash Bandicoot games for PlayStation. The game takes place in a Virtual Reality (VR) Hub System that Coco created, allowing her and Crash can access the levels. Both characters start off with five lives, but if they get hit by either an enemy or an obstacle or fall into a pit, they lose a life. Crash or Coco can get an extra life by either collecting 100 Wumpa Fruits or by breaking open a Crash Crate.

Most levels contain a Bonus Platform that takes Crash or Coco to a bonus room, where they must go through the area and destroy crates along the way. They can optionally collect Wumpa Fruit and extra lives, which are added to their total if they reach the other end and return to the main level. Once a bonus room is completed, it cannot be played again unless the level is replayed. In several levels, either Crash or Coco must drive a certain vehicle. They can collect a Crystal at the end of every level. If Crash or Coco has broken every crate in the level, including bonus rooms in some levels, they are rewarded a Clear Gem. Some levels have a Colored Gem, which unlock a hidden area.

Another collectible are Relics. To obtain a Relic, Crash must enter a completed level and touch a stopwatch to activate the timer. In doing so, Crash or Coco (depending on which character is used for the level) must try and complete the level as quickly as possible. They must break Time Crates along the way to temporarily pause the timer. If Crash or Coco complete a level within its time limit, they are rewarded a Relic. There are three types of relics, and certain one is obtained based on how quickly Crash completes a level. There are three types of Relics, Sapphire, Gold and Platinum, and the one they obtain depends on how quickly they complete a level. The first five Relics unlock a secret level, and every five Relics thereafter open up another level in the Secret Warp Room.

To achieve a 100% completion score, Crash must have completed every area and have collected every Gem, Crystal, and Platinum Relic.

The hub area is set in a warp room called the Virtual Reality Hub System, and it consists of five VR Hubs, each having five portals that can be accessed in a random order. At first, only the first VR Hub is accessible. The first four VR Hubs each have an associated Elemental. After Crash completes every level of a VR Hub, a sixth portal appears, and it leads to the boss level. After Crash defeats he can continue to the next VR Hub.

Crash Bandicoot: The Wrath of Cortex the first Crash game to be released outside a Sony console. There are a few minor differences between each version:

The musical score is composed by Swallow Studios, made up of Andy Blythe and Marten Joustra. Most of the score consists of electronic dance music, most noticeably in the boss battles and the ending credits.

These are the voice actors for the English and Japanese versions:

References to other games[edit]

The game was a commercial success. The game was mainly criticized by critics for offering nothing new to the series, featuring linear gameplay almost identical to Warped that didn't push the newer console's power, unlike Naughty Dog's next game Jak and Daxter: The Precursor Legacy.

Additional criticism came from the character models, that were poorly modeled and animated, as well as Coco's limited capabilities, available in only seven levels and a more restricted moveset than Crash's. At IGN.com, the PlayStation 2 version has a 7.4 rating, the GCN version a 6.9 and the Xbox version a 6.7. Despite average reviews, the game was a slow burner, and went on to sell an estimated 1.7 million copies. Although it did not quite match the sales of previous Crash Bandicoot titles, it did however make it one of the most commercially successful games of the early 2000s. The game sold enough copies to become Player's Choice (GameCube version), Greatest Hits (PS2 version), and Platinum Hits (Xbox version).

The game shares some similarities to Spyro: Enter the Dragonfly. Both games were the first multiplatform release of their respective series, both were the fourth release after their respective original PlayStation trilogies, garnered a similar reaction due to their uninnovative gameplay, and were released around the time that Vivendi Universal took control over both franchises. An interesting similarity was through the series plots. Both villains came back from circumstances that would be impossible to escape (Cortex was transformed into an infant and sent to a time prison in Warped, while Ripto sank in a pool of magma) in Spyro 2: Ripto's Rage!), without any explanation as to how they escaped (fan-theories have been created for both plotholes, though the only official discussion of this was in the official website and Wrath of Cortex strategy guide, reading "don't ask").

For this subject's image gallery, see Gallery:Crash Bandicoot: The Wrath of Cortex.