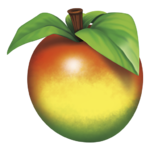 A Wumpa Fruit, as it appears in Crash Bandicoot N. Sane Trilogy

Wumpa Fruit, also parsed Wumpa fruit[1] and sometimes named Wumpa, is an apple-like fruit that appears in many Crash Bandicoot games, mainly as an item. They contain either a purple or an orange juice inside, depending on the game. Wumpa Fruit can be found just lying around or inside crates. In Crash Twinsanity, it is revealed that Wumpa Fruit grow on Wumpa Trees, several of which are on N. Sanity Island. Oddly, the Wumpa Tree seeds are much larger than the fruit itself, which probably means that the seed still grows long after the fruit disappears.

Wumpa Trees are best known for their yellow wood and leaves, and ability to grow rapidly. Wumpa Fruit usually have two or three leaves on them, except in Crash Tag Team Racing where they have four leaves.

Wumpa Fruit can be used as ammo for the Fruit Bazooka and the Wumpa Gun.

In the main series, Wumpa Fruits are the equivalent to Coins from the Super Mario games, as collecting 100 of them gives Crash an extra life.

In Crash Team Racing and Crash Nitro Kart, the Wumpa Fruit serves as energy for the karts, and collecting ten of them results in the racer being "juiced up", resulting in a faster kart and stronger weapons.

In Crash Bash, the Wumpa Fruit acts as either a health or speed boost in the minigames.

Wumpa Fruit are the currency in Crash Bandicoot Purple: Ripto's Rampage, and are used to buy certain objects.

In Crash Bandicoot 4: It's About Time, Wumpa Fruit are automatically collected when released from a crate, and spinning them no longer causes them to fly away. While Wumpa Fruit have the same purpose in the Retro play style, they were repurposed for the Modern play style because it does not retain the lives feature. In Modern mode, there is a gauge separated into three tiers, and collecting Wumpa Fruit fills up the gauge. By collecting a number of Wumpa Fruit, the gauge rewards Crash or Coco with a Clear Gem for clearing that tier. In N. Verted Mode, Wumpa Fruits are replaced by Bumpa Berries.