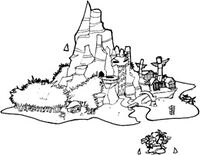 N. Sanity Island is the first and most recurring of the three Wumpa Islands. It was the home of Crash Bandicoot and his companions up until Crash of the Titans.

Much of the island is occupied by a large mountain located in the center. On the side of the mountain is a skull-shaped opening that expels a waterfall from its mouth. The resulting river passes through N. Sanity Beach, where Crash Bandicoot's adventure began. Before the overthrow of Doctor Neo Cortex, the island was largely inhabited by the native called tribesmen (led by Papu Papu), who would capture and/or eat anything that sneaked into their territory. Their village is guarded by a tall wooden wall that completely surrounds the village. Also surrounding the village are numerous monoliths, which the tribesfolk seem to worship. Some of the native animals include skunks, monkeys, bears, wild boar, bees, seagulls, and chickens.

After Cortex's defeat, the island became the official home of Crash Bandicoot, who lives in a medium-sized hut alongside Coco, Aku Aku and others. Their hut appears to be located between N. Sanity Beach and the jungle, as shown in Crash Twinsanity.