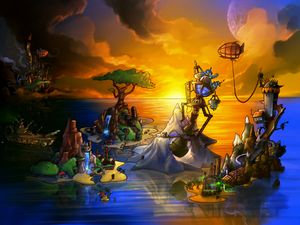 Not to be confused with Wumpa Island, the standalone island.

Wumpa Islands is an archipelago of three islands, N. Sanity Island, Wumpa Island, and Cortex Island, located to the southeast of the Australian coast. The Wumpa Islands are owned by Dr. Neo Cortex.[1] Legend has it that an ancient spirit named Aku Aku has protected the Wumpa Islands for eons.[2] Most games in the Crash Bandicoot series begin here.

The archipelago may be named after Wumpa Fruit, a type of fruit commonly grown in the area, or vice versa.

Nearby the Wumpa Islands are Iceberg Lab and the Academy of Evil.

Before the events of Crash Bandicoot, Dr. Neo Cortex and Dr. Nitrus Brio arrived on the islands. They obtained a castle for their experiments and filled the island with vicious threats. [1] [3]

The Tenth Dimension version of N. Sanity Island seen in Crash Twinsanity is known as Twinsanity Island, and is the exact opposite of the normally-lively N. Sanity Island; the flora is all dead and a black hole-filled purple sky hangs over the entire island. The waterfall now flows from a rock shaped like Evil Twins' heads rather than a skull. This island is the former home of Victor and Moritz, who resided in a large stronghold filled with dark, mechanical wonders. Because they were eaten by Evil Crash at the end of Crash Twinsanity, the future of this stronghold is unknown.