In 2020, a direct sequel, titled Crash Bandicoot 4: It's About Time, was released.

The game takes place immediately after Crash Bandicoot 2: Cortex Strikes Back, in which Doctor Nitrus Brio uses the gems Crash had collected to power his giant laser weapon to destroy Doctor Neo Cortex's space station. As a result, large chunks of the space station's debris plummet down to Earth and crash into an ancient monument. When the smoke clears, an evil entity flies off into the night.

Back on N. Sanity Island, the home of Crash and his friends, an evil laughter rings through the air. Aku Aku appears shaken and urges everyone to come inside, as a great evil has come.

In an as-of-now unknown area, Doctor Neo Cortex is seen cowering before Uka Uka, who appears to have saved Cortex from the depths of space and is now upset that Cortex has failed him twice. Cortex insists that it is all Crash Bandicoot's fault but Uka Uka's patience is spent, as there is now no other power source on the planet. But since Cortex has indirectly set him free, Uka Uka spares Cortex's life and introduces Doctor Nefarious Tropy, master of time and the creator of the Time Twister that the trio is currently standing on. With N. Tropy's Time Twister, the villains plan on gathering the Power Crystals in their original places in time.

Inside Crash's home, Aku Aku tells the Bandicoots a story of how many eons ago, Uka Uka, Aku Aku's evil twin brother, was locked in an underground prison by Aku Aku to protect the world from his malice, and now that he is free, he must be stopped at all cost. With that, Crash and his friends travel to the Time Twister Machine, where their adventure begins.

After Crash and Coco have defeated N. Tropy (along with Cortex's minions, Tiny Tiger, Dingodile and Dr. N. Gin) and collected all of the Crystals and all of the Gems, Crash battles Doctor Cortex in the core of the Time Twister Machine. Upon Cortex's defeat, the Time Twister implodes (due to N. Tropy's defeat), taking Cortex, Tropy, and Uka Uka with it. Crash and the others escape just in time for the snow season. As the ending credits roll, it is seen that the three villains are trapped in a time prison, with Cortex and Tropy transformed into infants and fighting over Uka Uka's possession. 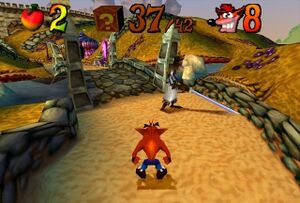 Crash Bandicoot: Warped takes place in a hub area titled the Warp Room, which every level is accessed from. There are five Time Warp chambers, each containing five levels and a boss fight, which can be accessed once Crash completes the five levels and obtains the crystal in each one. After completing the boss fight, Crash can access the next Time Warp chamber. The game supports the DualShock controller, which gives off a vibration in certain parts, such as while Crash or Coco are riding a vehicle. Whenever Crash starts one of two certain levels of a Time Warp chamber or its boss battle, a cutscene is shown in which that chamber's boss talks to Crash.

The gameplay is largely similar to the first two games, because in most levels, Crash or Coco must follow a path to the end. Crash Bandicoot: Warped emphasizes the use of vehicles, such as a plane or a jetski. There are a few prehistoric-themed levels in which Crash can ride a small T-Rex named Baby T and a few China-themed levels where Coco can ride a small tiger named Pura. Super Powers are introduced in the game, and are obtained for defeating a boss. Super Powers permanently give Crash an extra ability, such as a longer spinning attack or a double jump.

In every level, Crash can obtain a Clear Gem if he has destroyed every box. Some levels allow Crash to obtain another gem if he has completed a certain task, such as winning a race. By doing so, the Clear Gem appears at the end, in front of the exit portal. Some levels have a Colored Gem, which Crash can obtain by completing a level's secret area.

Crash Bandicoot: Warped introduces a Time Trial mode in each level, where the goal is for Crash to race through a level as quickly as possible. Time Boxes are laid throughout, and can freeze time for either one, two, or three seconds. If Crash is quick enough at completing a level in Time Trail, he is rewarded a Relic, which is either sapphire, gold, or platinum, depending on the completion time.

To complete the game, Crash must have collected all 25 Crystals, 45 Gems, and 30 Relics. If Crash has earned a 100% completion score, a second and final battle against Cortex is unlocked, and completing it unlocks an alternate ending.

The game has a time travel theme, so each level, and by extension the Time Warp chambers, are themed after a certain time period or setting.

There are two extra levels that can only be accessed from another level:

Crash Bandicoot: Warped has a playable demo of Spyro the Dragon, making it the first Crash Bandicoot game to have a playable demo of a Spyro game. The demo can be accessed from the title screen by inputting Up Up, Down, Down, Left, Right, Left, Right, and lastly the Square button. The code is similar to the Konami Code but with a Square button at the end rather than a "B" button and then an "A" button.