Initially, Crash Bandicoot Nitro Kart 3D was set to release for Symbian devices on April 29, 2008. The European release was to be helped by a marketing campaign with contests that had prizes modeled after Australia, and funded wireless application protocol advertising banners across several mobile entertainment sites. Vivendi was also going to organize a Crash Bandicoot Grand Prix in certain parts of Europe, where selected fans and key players from the video game industry could get a chance to play against each other in kart tournaments.[3] The game was eventually released on iOS on the day of the launch of its App Store.[1] On January 6, 2009, the game was released for the N-Gage service, which supported Symbian devices, and featured exclusive tracks.[2] 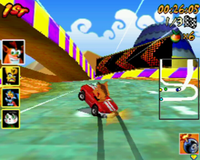 Gameplay screenshot of Crash performing a power slide in a race

The iOS version of Crash Bandicoot Nitro Kart 3D utilizes tilt-screen controls, allowing the player to steer the kart by tilting their device in a steering wheel fashion. The karts accelerate automatically. The player can have their racer perform a power slide by tapping and holding a finger on the screen, allowing their racer to get around tight corners. The objective of every racer is to win first place in a race.

There is a story mode, a quick race mode and a tournament mode) and a total of 12 tracks to race on (although the N-Gage version includes some more). Scattered throughout the tracks are weapons that can be picked up and used against the other racers in a bid to hinder their performance, such as bombs and oil slicks. Speed zippers can be found on the ground that can, if driven over, boost the player's speed for a short time. The same effect can be achieved by picking up a certain power-up off the track and activating it.

At first, only Crash Bandicoot and Doctor Neo Cortex are playable, but more characters can be unlocked along the way.

As of iOS 7, the game crashes when the MP4 intro loads, thus making the game unplayable. As of July 25, 2018, the game is no longer available on the App Store.[citation needed]

Levi Buchanan of IGN, giving the game a score of 7.8 out of 10, commended the game as "the best racer in the App Store right now," noting the game's "tight controls" and "lots of tracks to unlock."