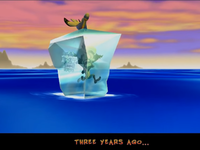 Cortex and Uka Uka drift in the sea while encased in ice, following the events of Crash Bandicoot: The Wrath of Cortex

The game takes place three years after the events of Crash Bandicoot: The Wrath of Cortex. Three years ago, following the game's ending, Doctor Neo Cortex and Uka Uka have been preserved in ice that drifted from Antarctica to the Wumpa Islands. At the start of Crash Twinsanity, Cortex manages to escape from the ice, and paralyzes Coco Bandicoot with his gun. Cortex takes her place by poorly disguising himself as Coco in order to lure Crash into the woods. He lures Crash to a bay where he reveals himself to be Cortex and is seeking revenge against Crash. With Crash's past foes as an audience, Cortex attacks Crash. After his defeat, Doctor N. Gin's Mecha-Bandicoot attacks Crash and stomps in a fit of rage after its defeat causes Crash and Cortex to fall into an underground cave. In the cave, Cortex becomes infuriated due to losing to Crash again and attacks in him causing them to roll through the cave.

After escaping the cave working together, Cortex and Crash are confronted by the Evil Twins who have come from another dimension to destroy the Wumpa Islands. Crash and Cortex formally team up and figure out that they need to travel to the Tenth Dimension with the aid of the Power Crystals in order to stop The Evil Twins' plans. Crash and Cortex travel N. Sanity Island and the Cortex's Iceberg Lab in search of crystals while also crossing paths with past villains Doctor N. Gin, Doctor Nefarious Tropy, and Doctor Nitrus Brio who are interested in The Evil Twins' treasure. They also freed Uka Uka from imprisonment in ice on the Iceberg Lab and Aku Aku convinces Uka Uka to join the forces with him in order to stop the twins but are easily dispatched by them.

After gathering enough crystals to power Cortex's Psychetron, Coco, who is no longer paralyzed, attacks Cortex, thinking that he had kidnapped Crash. She damages the Psychetron and gets paralyzed again. Cortex decides to recruit his niece Nina Cortex to help repair the machine, so they chart course for Madame Amberley's Academy of Evil to go fetch her.

After locating Nina, recruiting her, and clashing with Dingodile and Madame Amberley, Cortex remembers his connection to The Evil Twins on the ride back to the Iceberg Lab. The Evil Twins Victor and Moritz were Cortex's pet parrots during his youth at the Academy of Evil who he accidentally sent into the Tenth Dimension during an experiment. Back at Iceberg Lab, Nina helps fix the Psychetron and the group travels to the Tenth Dimension where Nina is kidnapped by the Tenth Dimension counterpart of Crash named Evil Crash. Eventually, Nina is recovered and the group defeat The Evil Twins in their stronghold. Victor and Moritz retreat and find themselves in front of Evil Crash's house where they are greeted by a hungry Evil Crash who devours them alive off camera.

Back in their home dimension, Cortex attempts to rid himself of Crash by using the Psychetron on him. However, his plan backfired when the machine malfunctions and sends Cortex into Crash's mind much to the surprise of Coco and Nina. Inside Crash's head, he finds himself surrounded by many personifications of Crash doing Crash's signature dance. 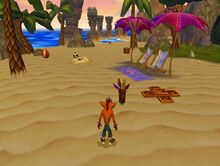 Screenshot of Crash and Aku Aku on the beach of N. Sanity Island

Crash Twinsanity is different from its predecessors in that Crash can freely explore three-dimensional open worlds rather than be forced to take corridor-like paths. Progression through the levels remain linear, and instead of using a hub world or Warp Room to access an area, Crash starts off from the World Crate that he most recently broke. Besides Crash, there are levels in which Doctor Neo Cortex is played and levels in which both he and Crash are played as together. In one level, the player controls Nina Cortex.

Crash has the ability to jump, perform a Spin Attack to knock enemies off-screen, slide across the ground, and perform a Body Slam to break certain objects. Cortex is armed with a ray gun and a limited amount of ammo. Whenever Crash and Cortex are together, Crash can use Cortex to increase the range of his Spin Attack, slam Cortex's head on the ground to activate certain objects, and throw Cortex across gaps, which is sometimes necessary in order to activate switches. Nina uses her mechanical arms to punch enemies and latch onto distant ledges.

Crash Twinsanity has three of its own gameplay styles that are featured in specific levels. One gameplay style is named HumiliSkate, and it involves Crash riding Cortex as a makeshift snowboard. Two other levels have a style named Doc Amok, which involves Crash clearing a path for a fleeing Cortex. Another gameplay style, named RollerBrawl, involves the player steering Crash and Cortex through the level as they engage in a brawl.

Like in previous games, Wumpa Fruit are scattered throughout the areas, and collecting 100 of them earns Crash an extra life. There are several types of Crates, and both Basic Crates and Multiple-Hit Crates can each be broken to obtain Wumpa Fruit. There are Aku Aku Crates which release Aku Aku if broken, and if broken again, it grants Aku Aku a second hit point and causes him to start glimmering. If broken a third time, Aku Aku grants temporary invincibility. If Crash jumps on a TNT Crate, a three-second countdown timer is activated, followed by an explosion. Nitro Crates immediately explode if touched and causes Crash to lose a life, even if he is temporarily invincible. Crates with plungers can detonate any Nitro Crate in the immediate vicinity. Crash can break Checkpoint Crates to save his progress in a level up to that point; therefore, if Crash loses a life, he restarts from the Checkpoint Crate that he broke the most recently. Gems littered throughout the levels can be collected to unlock extra content such as concept art and storyboards.

The game is divided into four hub areas, each consisting of three levels: