Not to be confused with Aku Aku Box. 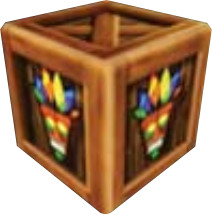 The Aku Aku Crate is a type of crate featured in every game of the main Crash Bandicoot series, starting with the first Crash Bandicoot game. When broken, the crate releases Aku Aku, who then tags alongside Crash throughout his journey. Aku Aku serves as an extra hit point for Crash, and disappears if Crash hits either an enemy or an obstacle. If Crash breaks an Aku Aku Crate but already has Aku Aku at his side, then Aku Aku turns a gold color, allowing Aku Aku to withstand two hits. If broken a third time, then Aku Aku becomes temporarily invincible, like what the Invincibility Mask item does in the racing titles.