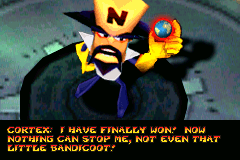 Since the game has extreme similarities with the earlier games from Naughty Dog, in gameplay and story aspect, The Huge Adventure seemingly takes place after the events of Warped. However, its sequel N-Tranced has a character named Crunch Bandicoot, who appeared earlier in The Wrath of Cortex. N-Tranced iteration is presumably the same one from the former game. Due to possible plot changes and circumstances, The Huge Adventure and N-Tranced do not precede other mainline games like Twinsanity (despite featuring Crunch's cameo in the game), thus creating an alternative narrative to the first four games from the main series. 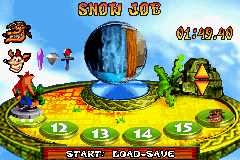 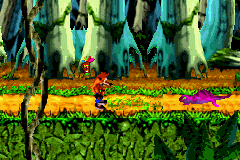 Every level and boss level has a theme. There are six different themes: jungle, underwater, ice cavern, sewers, sky, and outer space.

In December 2000, Vicarious Visions approached Universal and demonstrated some of their technology for the Game Boy Advance. Universal was impressed and commissioned a prototype, which resembled a handheld version of the first three Crash Bandicoot games. Vicarious Visions was then assigned to develop a Crash Bandicoot game for the Game Boy Advance.[2]

The game was tentatively titled Crash Bandicoot Advance and went through the titles Crash Bandicoot X/S and then Crash Bandicoot: The Big Adventure before arriving at its final name,[3] although Crash Bandicoot XS would become the name in PAL territories. The game was developed over the course of nine months from conception to completion. The team working on the game expanded to as much as seven programmers at the height of the game's development. The graphics and animation for the game were created in Maya.

Some of the original animation and textures from Crash Bandicoot 3: Warped were repurposed and used as a basis for the Game Boy Advance game. The audio for the game was supplied by Shin'en Multimedia,[2] with assistance from Universal Sound Studios. Manfred Linzner created the sound effects and Todd Masten composed the music. According to the developers, they have the battery save feature since the start, as a password system would make it very cumbersome to keep track of all the data.[2]