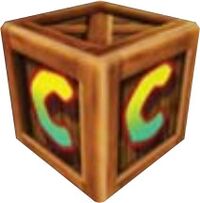 In Crash Twinsanity, Checkpoint Crates automatically break whenever Crash passes them. There are similar Crates named World Crates, which save the game progress itself, so if even if the player receives a Game Over, Crash restarts from the most recently activated World Crate.