Tiny is a tiger that was subjected to the Evolvo-Ray, and is usually seen serving under Doctor Neo Cortex. Before Crash of the Titans, Tiny was essentially a carbon copy of his spiritual predecessor Koala Kong: incredibly powerful and muscular, but overall unintelligent. Tiny's intelligence has since increased, giving the character a new depth and personality. Tiny Tiger is one of the strongest and most loyal henchmen of Neo Cortex.

It is generally believed that Tiny was created by Doctor Nitrus Brio, as the first three bosses of Crash Bandicoot 2 are serving under Brio, who is trying to stop Crash from gathering the Crystals for Cortex. Doctor Neo Cortex has also been credited with the creation of Tiny, with the Wrath of Cortex manual stating that Tiny was Cortex's first foray into genetic alteration. This conflicts with what was established by Naughty Dog, who confirmed that Ripper Roo was Cortex's first serious creation.

In Crash Bandicoot 2: Cortex Strikes Back, Tiny Tiger is the third boss fought by Crash Bandicoot. Under the orders of Doctor Nitrus Brio, Tiny attempts to destroy Crash Bandicoot inside a space station by crushing him under his feet. There is no floor in the room they fight in, but rather an endless chasm, with nine mechanical platforms set up in a three-by-three fashion to save both of them from falling to their doom. However, all of these platforms are faulty, eventually malfunctioning and deactivating. Crash uses this to his advantage, and tricks the gullible Tiny into jumping into the resulting gap that is created by these faulty platforms.

In the pause screen, he is erroneously referred to as Taz Tiger.

In Crash Bandicoot: Warped, it is revealed that Tiny survived his previous fall. Here, he serves under Uka Uka and Neo Cortex, and attempts to take the Crystals Crash and Coco have gathered and bringing them to Cortex in the Colosseum under his orders. Crash encounters Tiny in the Colosseum chained to two columns (a la Samson), which he snaps free from with ease. Tiny then proceeds to try and crush Crash under his feet, just as he did in their last encounter. When Tiny tries to impale Crash with his trident, the trident becomes stuck in the ground, leaving Tiny open for attack. Tiny then summons numerous lions to try and eat Crash. After this cycle is repeated two more times, Tiny succumbs, making Crash victorious.

In Crash Bandicoot: The Huge Adventure, Tiny is the third boss. He once again dons his gladiator attire and fights Crash near a large waterfall. His fighting style here is much like that in Warped, leaving Crash to beat him into submission whenever his trident is stuck to a platform. He is later merged with Doctor Cortex, N. Gin, and Dingodile, and becomes Mega-Mix. After chasing Crash down a space station hall, Mega-Mix is left inside the space station, which explodes with the villains in it.

In Crash Bandicoot: The Wrath of Cortex, Tiny the Tiger[1] is an attendee at Uka Uka's bad guy convention, not speaking a single line in the entire game. He later serves as an obstacle in certain levels, literally standing in Crash's way in an attempt to hinder him, as well as operating various flying vehicles in levels involving planes or spaceships.

Despite having a small role in the game, Tiny Tiger is still featured in the game manual.

In Crash Twinsanity, Tiny makes a cameo appearance during Crash's "birthday party" (which is really a gathering of past Crash villains).

In Crash of the Titans, Tiny Tiger is first seen protesting Neo Cortex's replacement alongside Doctor N. Gin by praising Cortex's stationery. Tiny is the one in charge of the mining operations seen in Episodes 5 through 7, responsible for destroying a portion of the jungle and obtaining minerals from the volcano. When Crash disrupts these operations, Tiny confronts Crash directly and voices his displeasure in both Crash's antics and the fact that he was not invited to Crash Tag Team Racing. He then orders his Titans to defeat Crash Bandicoot, promising the mutant who accomplishes this task half the day off on Tuesday. When Crash confronts Tiny with the Shellephant, Tiny decides to reveal the whereabouts of Crash's sister.

In the console versions, Tiny Tiger is voiced by Chris Williams, who voices him in the style of Mike Tyson.

Although Tiny does not physically appear in Crash: Mind Over Mutant, his voice can be heard in the game's credits when he tries to correct Crunch when he mixes up his metaphors.

In Crash Team Racing and its remake, Crash Team Racing Nitro-Fueled, Tiny Tiger appears as a playable character. He drives a green kart with high speed and low acceleration and turning. In the epilogue, Tiny moves to Beverly Hills and founds a popular chain of "Pain N' Gain" fitness clubs. Additionally, his "Tiny-Bo" exercise video make millions on infomercials around the globe.

In Crash Nitro Kart, Tiny Tiger returns as a racer with similar statistics to his appearance in Crash Team Racing, albeit with better acceleration. He is a member of Team Cortex, and shares his stats with Crunch Bandicoot. Tiny is seen playing checkers with himself and later tries to assist N. Gin when the tower they are in is abducted. At the end of the Team Cortex side of the story, Tiny, Cortex, and N. Gin are teleported to Terra, where Tiny gains the respect of the inhabitants.

In Crash Bash, Tiny is summoned by Uka Uka to battle against Aku Aku's team, alongside a handful of other villains. However, he is switched over to Aku Aku's team along with Dingodile, as Uka Uka's team was too big. In the "Crate Crush" levels, Tiny can toss crates halfway across the arena, and in the "Tank Wars" levels, his shots are short-range, but deal a large amount of damage.

Tiny's voice consists of both samples of his roar and Komodo Moe's laugh, both of which are from Crash Bandicoot 2: Cortex Strikes Back.

In Crash Boom Bang!, Tiny appears as a possible character in the "Silhouette Quiz" minigame.

In the crossover game Crash Bandicoot Purple: Ripto's Rampage, Tiny serves as the second boss, attempting to obliterate Crash in a frozen tundra with a tank. 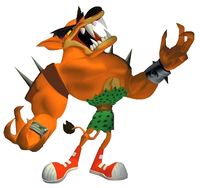 Artwork of Tiny Tiger for his debut appearance, Crash Bandicoot 2: Cortex Strikes Back

Before Crash Twinsanity and Crash of the Titans Tiny appeared to be an orange, muscular creature with sharp fangs and pointed nails. He was often seen wearing spiked shoulder pads, metal bracelets, a green leopard-spotted loincloth, and red sneakers. Due to the circumstances of the boss fight against him in Crash Bandicoot 3, his attire is updated to include a gladiator helmet, an armored left arm, two belts criss-crossing his torso, and a trident at hand. For an unexplained reason, Tiny also dons this attire in Crash Bandicoot: The Huge Adventure.

Tiny's species has varied over the years. His alternate name "Taz Tiger", seen from the pause screen of Crash Bandicoot 2: Cortex Strikes Back, suggests that he may have been a Tasmanian tiger, although his behavior is very much that of a common tiger. Design-wise, he resembled a mix of the two species, although he lacked the stripes both of them had. In Crash Twinsanity, Tiny is redesigned to resemble a Thylacine, where he had lighter fur, a smaller head and stripes on his back. In Crash of the Titans, Tiny was redesigned again to resemble a Siberian tiger. Tiny is fully clothed in this redesign, donning an attire that resembles that of a U.S. Marine. According to the Nintendo DS version of Crash of the Titans, Tiny is 2 meters tall (6 feet, 6.744 inches) and weighs 90 kilograms (198.45 pounds), putting his body mass index at 22.5 (normal range).

In his earlier appearances, Tiny was depicted to be a fierce but unintelligent creature. He is extremely loyal to Doctor Cortex, following his every whim without question, but is somewhat clumsy, as demonstrated in Crash Nitro Kart, in which he flattens Dingodile while rushing to assist Doctor N. Gin. Unlike Crash, who is somewhat smarter than him, Tiny is capable of speech, but often speaks in the third person, reflecting his low intelligence. A statement made by Doctor Neo Cortex in Crash Bandicoot: Warped implies that Tiny is not truly evil, but is only doing what he is told by Doctor Cortex because of his unintelligence and lack of ability to think for himself. Nevertheless, he is depicted as megalomaniacal, and is said to believe that Crunch Bandicoot was a "soft-hearted copycat".

Beginning with Crash of the Titans, Tiny's intelligence has increased to an average level above that of his master's nemesis. He is no longer a beastly monster who constantly bellows his desire to smash certain objects; rather, he is a considerate individual who continues to battle Crash for reasons other than following Cortex's orders. He has also grown a liking to Crash Bandicoot, describing him as one point as "stupendous and fantabulous". While this incarnation of Tiny is considerably less evil than in the past, he is still willing to aid Neo Cortex in his time of need, specifically when the latter faces replacement in Crash of the Titans.

Tiny's most notable ability is his superhuman strength; this strength allows Tiny to rip through metal surfaces, break free from bondage without assistance, and lift heavy objects. Despite his disproportionately skinny legs, Tiny is known for his incredible jumping prowess, as demonstrated in the boss battles against him. Tiny uses this power along with his heavy muscle mass to crush any of those unfortunate enough to be under him at the time. While Tiny doesn't fight Crash directly in Crash of the Titans, he is shown to still be capable of impressive strength, performing such feats as easily lifting Crash off the ground by the arm and sufficiently harming him with but a flick of a finger. In the Game Boy Advance version, Tiny is shown to be skilled in hand-to-hand combat, and can shoot purple fireballs from his hands.