Crunch Bandicoot is a large, muscular bandicoot in the Crash Bandicoot series. His first appearance was in Crash Bandicoot: The Wrath of Cortex, as one of the main antagonists. After being defeated, Crunch changed his ways and joined the bandicoots, thus becoming a secondary protagonist in subsequent games. In the racing games, Crunch drives heavy vehicles that have a high speed.

Crunch was originally designed by Sean Krankel and Craig Whittle. 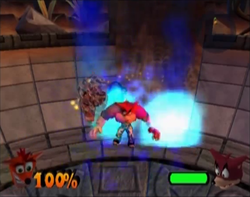 Crunch gets hit by boulders in the first boss fight, Rumble in the Roks.

In Crash Bandicoot: The Wrath of Cortex, Crunch was created by Doctor Cortex in private as a superweapon that would be capable of frightening power. Doctor N. Gin and Doctor Nefarious Tropy (who only had a slight understanding of the project) were the only other individuals who knew about the weapon. During a bad guy convention held by Uka Uka, Tropy and N. Gin reveal the weapon in desperation for one good plan to defeat Crash Bandicoot, who Uka Uka wants eliminated. Doctor Cortex formally announces the superweapon, but reveals that it is still missing a power source. Hearing the word "element", Uka Uka brings up the Elementals, a group of destructive masks that could create enough energy to bring the secret weapon to life. The weapon, who is Crunch Bandicoot, attempts to defeat Crash with the aid of the Elemental masks, all of whom gave Crunch an elemental power:

When Crunch is defeated in Cortex's space station, he snaps out of Doctor Cortex's control. Although his first instinct is to introduce his fist to Cortex's face, Aku Aku informs Crunch of the space station's imminent destruction, and the group decides to flee back to Earth. There, Crunch shows his gratitude toward the Bandicoots, and becomes part of the Bandicoot family.

In Crash Bandicoot 2: N-Tranced, Crunch is abducted by N. Trance and is brainwashed alongside Coco and Fake Crash. Crash battles Crunch on a flying carpet over the skies of Saudi Arabia, with Crash firing shots of energy at Crunch whenever the latter is stunned by exploding Nitro Crates. Upon snapping out of N. Trance's control, Crunch becomes a playable character in some of the Atlasphere levels.

In Crash Twinsanity, Crunch has a cameo in Crash's "birthday party", which is a gathering of earlier villains in the series. Crunch actually believes it to be Crash's birthday, donning a green paper crown and holding a slice of cake.

In Crash of the Titans, Crunch is ambushed by Doctor Cortex during the beginning of the first episode, leaving him frozen from the neck down. He stays this way until the end of the game, in which the Doominator's collapse is able to set Crunch free. Crunch does not appear in the DS version of the game. In the Game Boy Advance version, Crunch is taken prisoner by Tiny Tiger by order of Neo Cortex. He is freed upon Tiny's defeat.

Crunch appears in Crash: Mind over Mutant, where he becomes addicted to the NV device alongside Coco to the point where he is unable to help Crash and Aku Aku when they are attacked by N. Gin's Ratnician army. He is later mutated by the bad Mojo transmitted by the NV and runs off, leaving a mutated Coco to fend off Crash. He is later found at the Junkyard, where Nitrus Brio commands Crunch to attack Crash. He is soon freed from the NV's control, but continues to be beaten up by Crash for a short time. He then decides to go back home and get some sleep

In Crash Nitro Kart, Crunch is a playable character. He is on Team Bandicoot along with Crash and Coco.

In Crash Boom Bang! Crunch Bandicoot is one of the playable characters.

In Crash Bandicoot: Wrath of Cortex, Crunch is first portrayed as being the over-confident type, constantly believing that he can eliminate Crash with ease. This behavior causes him to become defiant later in the game, insisting that he doesn't even need the Elementals (his power source) to defeat Crash, and becoming generally annoyed with Cortex. It is not until he is defeated that Crunch snaps out of Cortex's control and lives with the Bandicoots (though he is brainwashed again in Crash Bandicoot 2: N-Tranced).

Because of his time with the Bandicoots, Crunch's personality has gradually changed after his liberation from Cortex's control. In Crash Nitro Kart, Crunch is shown to be an avid weightlifter, living under the philosophy of "eat less and exercise more". In Crash Tag Team Racing onward, Crunch's personality is based on Mr. T, and he even uses his catchphrases. His love for exercise is repeated here, though he is also interested in nutrition, and at one point plans to sell Crash and the others out through future endorsements in hopes of becoming a famous and respected figure. Despite his rather masculine demeanor, Crunch occasionally shows a soft side; in Crash Tag Team Racing, it is revealed that Crunch sleeps with a pink teddy bear aptly named 'Pinky Bear', and is unable to sleep without it. Crunch also appears broken up when Von Clutch's Power Gem is supposedly lost (causing Von Clutch to lose his soul). Crunch does not take kindly to rude behavior or bad manners, an example of this occurring in Crash of the Titans, in which he can be heard saying "Hey! Stop that!" upon hearing Crash emit a loud belch.

In contrast to Crash and Coco's meager size and build, Crunch is generally depicted as a large, muscular, burgundy-colored bandicoot with a metallic arm, camouflage pants and large boots. In Crash Twinsanity, Crunch is unusually smaller than normal, being shorter than even Tiny Tiger in the same scene. While Crunch's metallic arm usually takes the form of an arm, it can also be turned into a laser cannon-like device, as shown in the boss fight against him in Crash Bandicoot 2: N-Tranced. In the games prior to Crash of the Titans, Crunch's metallic arm only covered his right forearm and hand. In Titans, the cybernetics not only cover his entire arm, but take on a new, futuristic appearance. In addition, there are two scars above Crunch's chest. In Crash Tag Team Racing, Crunch is depicted with a metallic ear.

Crunch's most notable ability is his enormous strength, reflected in his large muscles. Although he is not as graceful as Crash or Coco, he balances this with his power. Crunch is an experienced fighter, and is able to break through most things with his bare hands.

Crunch's original power sources were the Elementals, elemental masks awoken from hibernation by Uka Uka. These powers would later disappear when Crunch was freed from Cortex's control.