Not to be confused with Bounce Box. 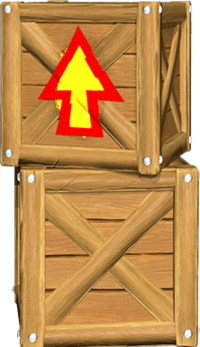 Arrow Crates[1] are a type of crate found in most games of the main Crash Bandicoot series. They have a yellow arrow painted on them, usually with a red outline. Crash can jump on an Arrow Crate to gain a boost in height, allowing him reach higher platforms and sometimes other crates. Breaking an Arrow Crate usually releases a Wumpa Fruit. There is a type of Arrow Crates made from iron, the Iron Arrow Crates, which serve the same purpose but cannot be destroyed. Arrow Crates function the same within each of their appearances.