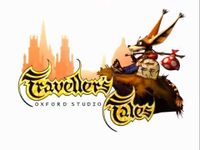 There are two different instances in which Traveller's Tales tried to create a Crash Bandicoot racing game. The first attempt was Crash Nitro Kart, but Universal Interactive handed over the project to Vicarious Visions.[1] A few years later, after Crash Twinsanity's release, the Oxford Studios division started development of Crash Clash Racing. For unknown reasons, Vivendi Games handed over the development to Radical Entertainment.[2] Around the same time, the Oxford Studios division planned Cortex Chaos, a game which never got past the concept stage.[3]