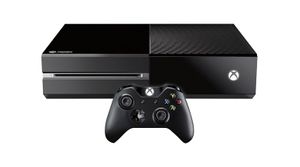 A black Xbox One with a controller

The Xbox One is a home console released in 2013 and the successor to the Xbox 360. It is a competitor to the PlayStation 4 and the Wii U, and later the Nintendo Switch.

There are three Crash Bandicoot games for the Xbox One, one of which also lists itself as an Xbox Series X game. However, Crash Bandicoot's first appearance in an Xbox One game is Skylanders: Imaginators.

Four compilations were released for both the Xbox One and the PlayStation 4, with only the Crash + Spyro Triple Play Bundle being digital-only.