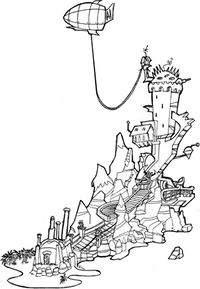 Cortex Island became industrialized ever since Cortex lived here, as this is where he builds his inventions, and it is also where his castle, Cortex Castle, is located. There is a refinery named Cortex Power, which is a large source of pollution, especially from dumping large amounts of toxic waste into the ocean. Besides Cortex's inventions and industrialized areas, Cortex Island consists of a beach, palm trees, two rocky mountains, a rope bridge, a temple where Uka Uka was imprisoned, and ruins.

Shown in the ruins levels from second game which that island was inhabited by primates only. Here was the Uka Uka's prison where his twin brother Aku Aku holds him in a temple built on a high mountain for his crimes against world.

Eons later, this island served as a shelter for Cortex and N. Brio to hide from various forces where the pair is wanted.[1] The construction of Cortex's two facilities changed the island's environment where it was completely polluted by toxic waste refinery and patrolled by robots & mutants.

When Crash Bandicoot was created by Cortex in first game, this island was invaded by him where the Cortex's facilities were sabotaged and thugs defeated to save his girlfriend Tawna Bandicoot. One year later, this island served as housing for N. Brio and all flora begins to produce after the disarming of the harmful facilities in the first game. In third game, once again this island is shown where a piece of Cortex Vortex spacestation goes towards it where destroys the Uka Uka's temple prison.