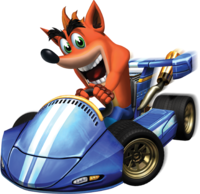 Artwork of Crash driving his kart in Crash Nitro Kart

Karts are a vehicle used by racers in the racing titles of the Crash Bandicoot franchise. They first appear in Crash Team Racing. In earlier installments, every character can only use one type of kart.

In Crash Team Racing, every character uses the same kart model. It is held together by pipework, has dual exhaust engines, no sides, and large, silver-rimmed wheels. Each character uses a uniquely colored kart. Nitros Oxide is the only character that does not race in a kart, but instead uses a hovercraft.

In Crash Nitro Kart, Emperor Velo modified the karts for use on his race courses. The most noticeable modification is that the karts can turn their wheels sideways, enabling them to stick to the track in anti-gravity mode.

A unique kart design is used for each of the four teams: Team Bandicoot, Team Cortex, Team Oxide, and Team Trance. Unlike Crash Team Racing, the kart color is the same for every racer on a team. There is a fifth type of kart (later named the Velo Chopper) that is used by Emperor Velo and the other four bosses.

In Crash Tag Team Racing, they are known as cars. This is the first game in which the player can choose from more than one car for their racer, provided they have been unlocked. During a race, two racers can merge their cars together into a single one, which is the game's main gimmick.

In Crash Team Racing Nitro-Fueled, there are a lot more karts than in the original game. Most karts can be customized from different vehicle parts, much like in Mario Kart 7 and Mario Kart 8. These parts include bodies and decals, paint jobs, stickers and wheels. The game also features Special Karts, which are pre-built karts that do not have customizable vehicle parts. There are also Kart Sets, which consists of a set of parts that create a predetermined kart. Kart Set parts are customizable except for the decals, which are permanently stuck to the kart's body.

Most karts from earlier racing installments reappear as kart body options, including Crash Team Racing's kart design and Oxide's Hovercraft, all five kart types from Crash Nitro Kart (which share a name with their team, e.g. Team Bandicoot), and some cars from Crash Tag Team Racing.